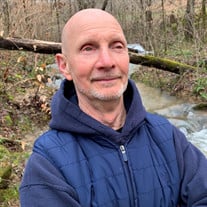 David B Fincher, 67, of the Gallant/Ivalee Alabama area, passed away Friday, January 8, 2021. He had bravely fought a battle against liver cancer for three months. David was the loving life partner of Peggie Griffin. Peggie and their little fur baby Roxie were the center of his life. He is also survived by two sisters Goldie Woodward and Sarah Watson; two brothers, Charles Brady Fincher and Norman Kenneth Fincher; and by Peggie’s daughter Gwendolyn Griffin. Proceeding him in death were his father, David B Fincher, Sr. and his mother, Helen Campbell Fincher. David was born in Albuquerque, New Mexico, then grew up in Montgomery Alabama. He spent many years in Tuscaloosa Alabama, where he went to Shelton State Community College, operated his auto detailing business, Apple Polishing, and where he met Peggie. In 2001, he and Peggie moved to the Gallant/Ivalee, Alabama, area. David loved hiking and working hard to improve the land where he and Peggie lived. They enjoyed gardening, building trails, and working with their animals. He also enjoyed keeping bees and building rustic furniture. He and Peggie displayed and sold their rustic furniture at art shows across Alabama. David was the Birmingham District Manager for Kemco Facilities Services in Montgomery. He was very dedicated to the company and its owners, as well as the employees who worked for Him. He took pride in a job well done. One of David’s passions was Chinese Kenpo, and he was an instructor in this form of martial arts for many years. David described it as “an integrated system which combines the martial arts of Karate, Kung Fu, and Wing Chun. It is a self-defense system of martial arts characterized by the use of quick moves in rapid-fire succession, intended to overwhelm an opponent.” In light of the Covid 19 pandemic, a celebration of life zoom call is being scheduled for David’s friends and family. Special thanks to all the family and friends who have helped with their loving support of calls, prayers, and donations..

David B Fincher, 67, of the Gallant/Ivalee Alabama area, passed away Friday, January 8, 2021. He had bravely fought a battle against liver cancer for three months. David was the loving life partner of Peggie Griffin. Peggie and their little... View Obituary & Service Information

The family of David B. Fincher created this Life Tributes page to make it easy to share your memories.

David B Fincher, 67, of the Gallant/Ivalee Alabama area, passed...

Send flowers to the Fincher family.