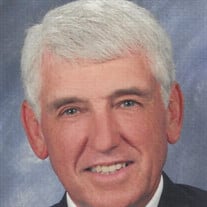 Larry Dale Bryant, 77 of Boaz passed away Wednesday, December 29, 2021 surrounded by his loved ones. Larry was born at home in Geraldine, Alabama (Dekalb County) on March 24, 1944. He was the only son, as well as an only child born to Arthur Bryant and Apherine Dickerson Bryant. Growing up, Larry went to Geraldine High School and later attended Snead State Community College. Larry married the love of his life, Julia Rice Bryant, on the snowy night of January 11, 1969, and enjoyed 52 years of marriage. Larry and Judy were blessed with two daughters: Amy Bryant Royal born in May of 1971, and Susan Bryant Baudy born in December of 1974, two granddaughters: Sarah Ashley Royal, and Mary Emily Royal, as well as two beloved sons-in-law’s: Chris Royal and Michael Baudy. Larry faithfully served his church, Sardis Baptist Church, as an active deacon for many years, and served his community as an elected member of the Sardis City Council for 33 years. Larry served his country as a member of the National Guard for 6 years. After his time at Snead State Community College, he worked at Farmers Mutual Exchange in Anniston, AL. He later began working at Goodyear in Gadsden, AL for 33 years. During his time at Goodyear, he started as a tire builder, and completed his time there as a trucker, transporting equipment throughout the plant. He was a hard worker, a craftsman, and an avid outdoorsman; particularly enjoying hunting, fishing, as well as farming and caring for animals. Larry was a devoted and loving Husband, Father, and Grandfather, and was truly beloved by all who knew him. His funeral service will be at 1 p.m. Monday, January 3, 2022 at Sardis Baptist Church. Burial will follow in the adjoining cemetery. The family will receive friends from 11 until 1 before the service at the church. Rev. Mike Goforth, Rev. Max Roden, Eulogy by Terry Stephens will be officiating. Pallbearers will be Tim Roden, Chase Bolding, Dylan Bolding, Marshall Glenn, Brandon Frazier, Chris Royal, Honorary Pallbearers will Dale Johnson and Dr. Evan Johnson. The family has requested flowers or donations to Sardis Baptist Church - Children’s Church. Etowah Memorial Chapel Directing

Larry Dale Bryant, 77 of Boaz passed away Wednesday, December 29, 2021 surrounded by his loved ones. Larry was born at home in Geraldine, Alabama (Dekalb County) on March 24, 1944. He was the only son, as well as an only child born to Arthur... View Obituary & Service Information

The family of Larry Dale Bryant created this Life Tributes page to make it easy to share your memories.

Send flowers to the Bryant family.