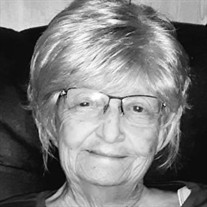 Norene Golden Peppers 75 of Boaz passed away Monday, January 11, 2021 at her residence Her Funeral Service will be 2 p.m. Thursday, January 14, 2021 at Etowah Memorial Chapel with burial to follow at Myrtle Tree Cemetery. Visitation will be... View Obituary & Service Information

The family of Norene Golden Peppers created this Life Tributes page to make it easy to share your memories.

Send flowers to the Peppers family.